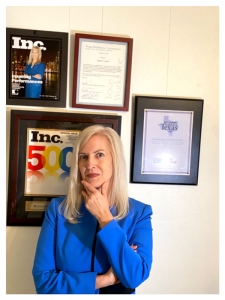 Birgit was appointed to the coveted role of a Board Member of the Gulf Coast Workforce Commission 3 years in row, during which time she was also asked to become the new Chair of the Education Committee.

A few years into growing her company Birgit’s health began deteriorating. The immense stress, long hours and fast growth had taken their toll. She found herself in the midst of a real crisis – “do I continue this way and compromise my health even more, or do I do the unthinkable and sell the company…?”
She decided to put her own oxygen mask on and sell her company to a national staffing firm.

Soon after, she was given the greatest gift of all and became a happy mother to a beautiful daughter.
Her daughter made her realize what was real and important, and how she wants to spend her time – being the best mother and role model she can be. This has shaped all her decisions since.

Birgit began focusing on supporting other high-achieving leaders, who are frustrated for not reaching their goals as fast as they know they could.

By helping her clients discover their leadership blindspots and remove them out of the way, Birgit accelerates their company’s success and they find that they finally can enjoy a higher quality of life (even during crisis times).

Clients refer to Birgit as the “Human X-Ray who discovers leadership blindspots in lightning speed”. But that’s not all they say…

Birgit is also the host of “CEO Blindspots” podcast, where leaders lead leaders. You can listen to her and other leaders share their own blindspots every Friday right here.